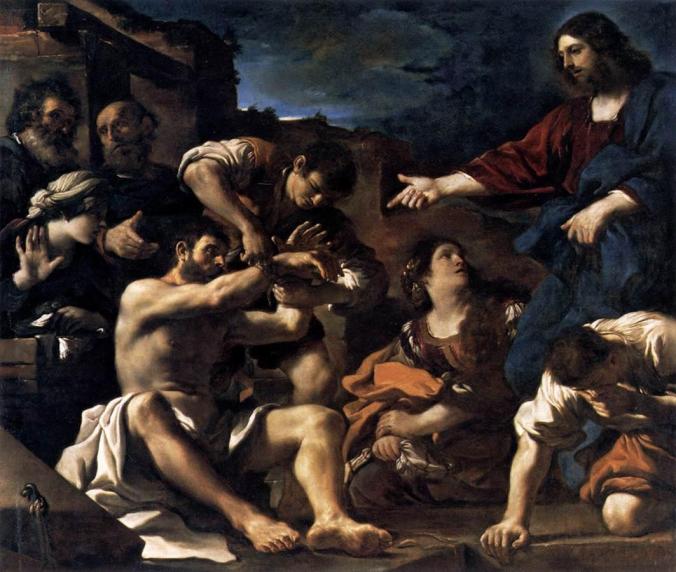 What do you think of when you hear the phrase “Christian community”?  Prayer?  Bible studies?  Free food?

I bet you didn’t think about death, did you?

Take a look at John 11:33-43.  In this passage, Jesus comes to a pair of sisters named Mary and Martha, whose brother, Lazarus, has passed away.  There are several things that happen in this passage applicable to us as we engage in Christian community.

Look at verses 33 and 35.  Jesus asks Mary, in regards to her brother’s body, “Where have you laid him?”  Mary responds, “Come and see, Lord.”  And then, Jesus weeps.  It’s not clear whether or not Jesus cries (the Greek suggests that He silently sobs) out of grief or out of sorrow, or over the lack of faith of those He is surrounded by; but either way, it must have been a sight to see the Son of God shedding tears.  It’s a reminder to us that Jesus was and is very much human.

Next, look at verse 39.  Mary, Martha, and Jesus approach Lazarus’ tomb.  Martha says, “By this time, there is a bad odor, for he has been there four days.”  My reaction here would have been to wrinkle my nose and step away.  No one wants to deal with stinky corpses.  But, Jesus is a much better person than I could ever be.  He doesn’t retreat or say, “Four days?  Nope.  I’m not dealing with that.”  He goes about what He came there to do.  He shouts, “Lazarus, come out!” (verse 43) and Lazarus does just that, like nothing had ever been wrong with him.

So, what does all of this have to do with walking through life with other believers?

In the same way that Mary invites Jesus to come and see the tomb where Lazarus was buried, community involves seeing the dark parts of one another’s lives.  I think that when we are able look into brokenness, it allows us to see what exactly needs to be repaired.  The brokenness in our lives may take on several different forms: worry, fear, confusion, distractions…the list could go on and on.  We’ll come back to that in just a second.

The second point is that Jesus weeps.  It reminds me of Galatians 6:2, where we’re told to carry each other’s burdens.  In this moment, Jesus certainly shows His humanity to those around Him by sharing in their sadness.  In the same way, we may find ourselves immersing ourselves in the grief of those around us.  That’s okay, but we do have a duty in those times, and it’s to call that which is dead back into life.

Community stinks sometimes — and by that, I mean that we’re going to encounter death and its odors from time to time.  We may step into places in each other’s lives where things just aren’t as they should be.  And it certainly isn’t always going to be easy — in fact, I think the deeper sense we have of community, the more tombs we’re going to look in to.  And the more tombs we see, the more chances we have to revive things that have died.  And yes, that’s going to be dirty, hard work, but it’s done in the name of Jesus, and it’s going to lead toward life.

So, as you walk with others, put your faith into action.  Shed light and life into tombs.  Come and see, go and do, and expect to get dirty.