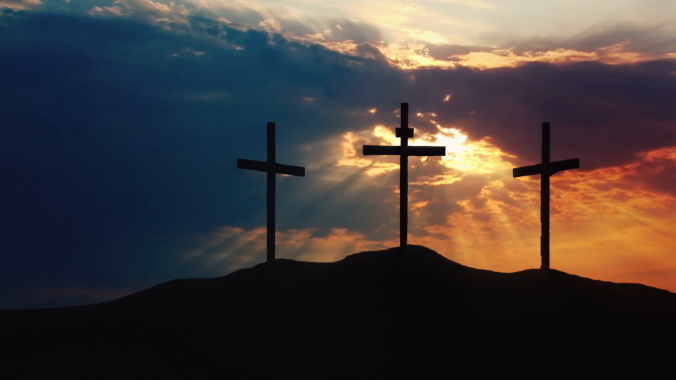 You look out at that rough landscape. A smattering of people is gathered around three crosses, Roman guards standing with spears in hand to help ensure everything goes according to plan. Here, on this hill, three men — the worst of the worst — are about to die. They’ll get what they deserve. Except for one: one whom Pontius Pilate said was innocent, but to appease his angry citizens, handed over to the people to be crucified. Above this man’s head, the words “Jesus the Nazarene, King of the Jews” are written on a wooden sign, and as far as you were concerned, He was the King of the Jews. He was the Savior the Jews had been waiting for.

“If He’s the Son of God, surely He can let Himself down!” a voice calls out from the crowd. And you hate to admit it, but you think the same thing.

For a day that would go down in history as a day called Good Friday, this doesn’t seem good. Was Jesus a liar? Was He a fraud? Why wasn’t He saving Himself? All the miracles He had supposedly performed — were those just fables?

At some point, Jesus calls out to God: “My God, my God, why have You forsaken me?” And then a little while later, He breathes His last breath. A guard stabs Him in the side to make sure He’s dead, and blood and water pour out of the wound.

When our lives feel like that Friday, we may find ourselves asking questions along the lines of Jesus’ question to the Father: “My God, my God, why have You forsaken me?”

“My God, my God, why did You let my parents’ marriage fall apart?”

When our lives feel like the Friday that Jesus was nailed to the cross, the world is going to seem like a dark place. It’s going to feel like evil has won.

The cross shows us that though the enemy may strike and appear to be victorious, God is still greater. Though Jesus’ body was laid in a tomb, His body would not stay there. Death could not keep its grip on Jesus. The stone was rolled away, the tomb was empty, and Jesus, with His nail-scarred hands, rose up from the dead.

If your life feels like the Friday when Jesus was crucified, don’t give up hope just yet —Sunday is coming. No…Sunday is here.

The victory is won.